Prison and Justice Guard (ZVJS) within meaning of act 4/2001 of Prison and Justice Guard (ZVJS) is armed security force which performs tasks in field of detention, imprisonment, protection and guarding ZVJS buildings, security, order and security in court buildings and prosecution facilities. In order to perform tasks with ZVJS to ensure the scope of detention, imprisonment, protection and surveillance of ZVJS buildings assigned for detention and sentences of imprisonment, as well as other prison facilities, in search for accused and convicted persons in the event of escape from imprisonment or custody within the meaning of RMS 2/2006 establish Special Intervention Groups. In ZVJS scope are 17 Special Intervention Units each of them has its own squad. In necessary situations in infringement of the accused and convicted, which cannot be handled by deployment of the Response team from particular department of ZVJS, are established holding areas: Bratislava, Trenčín, Banská Bystrica and Košice.

Prerequisite for the deployment of the Special Response Team in action is putting it into standby particularly:

In selected institutions ZVJS – Leopoldov, Nitra, Banska Bystrica and Kosice Intervention Units specialists are trained to work at heights and depths of free climbing technique possessing the identity of competence within the meaning of SUBP and SBU 374/1990. Parts of Intervention Units are also dog handlers with the service and each Intervention Unit requires a number of knowledge of martial arts – JU JITSU

Intervention Unit can in addition to the tasks specified in the Special Response Team perform other tasks, namely:

It should be noted that members of Intervention Unit are members of the ZVJS included the ZVJS in various positions, suggesting that the intervention units to work beyond their normal duties. 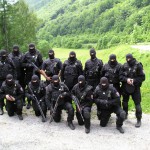 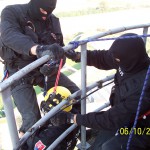 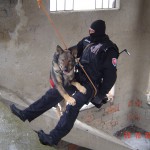 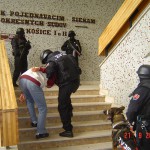 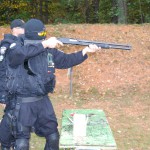 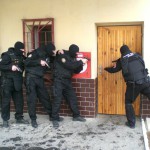